Meet the Haircolorist Behind Some of Hollywood’s Most Beautiful Blondes
Live your life in color. When you feel confident, you live more confidently. And for us, it all starts at the top. Located in New York, New York.
New York Salon, Hair Color, Sharon Dorram, Sally Hershberger, Upper East Side, NY Salon, NY Hair Salon, NY Hair Color, Celebrity Stylist
1009
post-template-default,single,single-post,postid-1009,single-format-standard,bridge-core-2.4.3,ajax_fade,page_not_loaded,,qode_grid_1300,footer_responsive_adv,qode-theme-ver-22.6,qode-theme-sdsh,wpb-js-composer js-comp-ver-6.4.2,vc_responsive 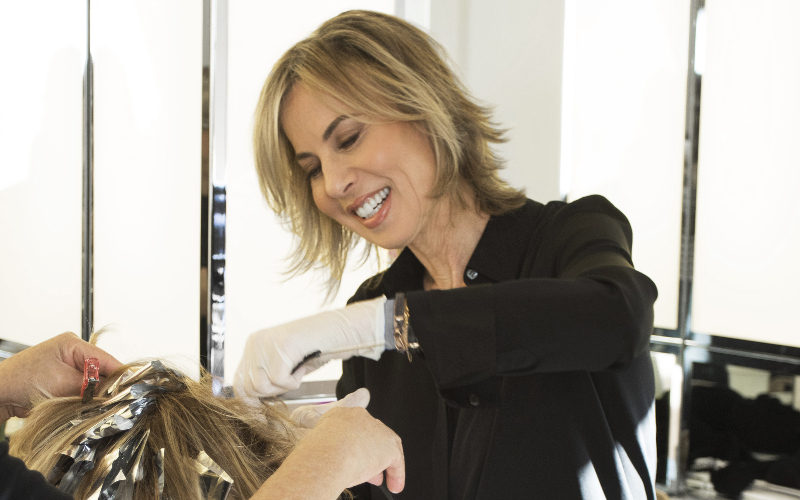 Meet the Haircolorist Behind Some of Hollywood’s Most Beautiful Blondes

Posted at 10:17h in Uncategorized by Sharon Dorram
Share

As an art school student, Sharon Dorram (@sharondorramkrause) had dreams of becoming a couture textile designer. “I was primed to go into the art world,” she says. “My family was all about education—my dad went to Harvard, my mom was a concert pianist and I was a little duckling being stuffed with culture.”

So, how did she begin tending to the tresses of Hollywood’s A-list? “A guy I was dating told me I’d make a great colorist,” she says. “I had no clue about the hair world.” She enrolled in beauty school, trained under Louis Licari, and bounced from John Sahag to Oribe to Fekkai to John Frieda, growing like a snowball.

“It doesn’t matter if it’s Christie Brinkley or Linda Evangelista or the girl who saved her dollars up, I want each client to have my signature,” she says. “I’ve always wanted to be a household name, not a flavor of the month.”

For the past decade, together Hershberger and Dorram have become household names when it comes to beauty, with Dorram running her color salon at Sally Hershberger Uptown in New York City. It was there that Dorram met her latest collaborator. “Sally asked if I could fit in a client, who I’d never seen before,” Dorram says. The client was Melisse Shaban, who was gearing up to launch a new haircare line, Virtue Labs. “She was talking about the products and technology, and it sounded so exciting. I tried the samples and saw an instant change in my hair.”

Fast-forward, Dorram is now color director of the keratin-based haircare brand. So, what is the key to all her success? “Follow your bliss,” she says.  “Follow your heart and what you know to be true to you. Once you find that, the rest will be easy.”